You Are Here: Peter Werner Gold 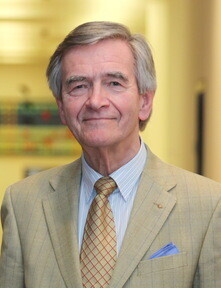 He began his professional career as a scientific assistant at the Machine Tool Laboratory (WZL) of RWTH Aachen University (1971-1977). He worked at the WZL from 1977 to 1980 as head of the department "Gear and Transmission Technology".

In 1979 he received his doctorate under Prof. Weck with the topic "Static and dynamic behavior of multi-stage gear trains". From 1980 to 1985 Prof. Gold was assistant manager, authorized representative and authorized signatory at the company Reintjes in Hameln, responsible for development, design and production. From 1985 to 1986 he became a member of the management board of this company. (marine gear units)

From 1985 to 1991 Prof. Gold was a lecturer at the Technical University of Hamburg-Harburg (TUHH), subject of the lecture: "Noise control in mechanical engineering".

From 1986 to 1992 Prof. Gold was managing director, spokesman and finally chairman of the board of Lohmann & Stolterfoht (today ZF Industrieantriebe) in Witten. (Transmissions for industry, construction machinery, ship main drives, wind turbines).

Prof. Gold took over the chair for machine elements and the management of the associated research institute at RWTH Aachen University from 1992 to 2008 as successor to Univ.-Prof. Dr.-Ing. Heinz Peeken.

During this time, he held lectures in the subjects "Machine Elements", "Tribology" as well as "Machine Acoustics and Dynamic Causes". He also headed the research institute with these subjects and in the field of powertrain technology.

Prof. Gold has been Emeritus since 2008.

Univ.-Prof. Dr.-Ing. Georg Jacobs is the successor of Prof. Gold.

"Ring of Honor of the VDI", awarded by the Association of German Engineers (VDI) in 1981.

"Fritz-Kesselring-Medal", awarded by the Association of German Engineers (VDI) in 2006.

Prof. Gold is active as a consultant and expert according to his professional experience as well as various honorary positions at RWTH Aachen University.