You Are Here: Venue 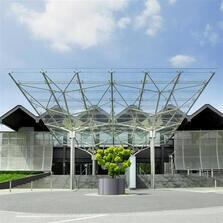 The rooms, their furnishings and acoustics allow for the organization of all genres. Conferences, meetings and seminars, trade fairs and congress accompanying exhibitions, concerts of classical music and popular music, theater and cabaret performances, musicals and balls.

In Aachen you will find more than ideal Infrastructure.

With more than 245,000 inhabitants, Aachen is the most western of the major German cities and is located in the so called “Euregio” – close to the European neighbours Belgium and the Netherlands.

Also, more than 50,000 students have found their new hometown in Aachen, because RWTH Aachen University is one of the most popular German universities.

Aachen offers a wide range of accommodations in the categories from 2 to 5 stars. Most of them – as almost everything in Aachen – are located within walking distance to the Eurogress Conference Center. The 5-star Hotel Pullmann Quellenhof Aachen, offering 180 rooms, is even directly connected to the Eurogress.

Regarding cultural events, Aachen offers an almost infinite variety of possibilites. A few examples are the UNESCO World Heritage Site “Aachen Cathedral,” the “Ludwig Forum” for contemporary art, and the beautiful old town center around the historic city hall.

Numerous events take place in Aachen on a regular basis, for example the CHIO, the World Equestrian Fesitval or the international “Karlspreis zu Aachen,” as well as the Aachen Christmas market which attracts more than 1.5 million visitors per year.

Experience the possibilities and charm of Aachen!